In the reenactment community, the 148th New York Volunteers are considered veterans. Established in 1962, the 148th is the oldest Civil War reenactment organization in New York State. Since its founding, it has participated in several hundred Civil War battle reenactments and hosted scores of living history events, marched in parades and given presentations for schools and historical societies. Even though the organization is built on a military impression, families participate in the recreation of a time in American history when everyone was touched by the events, not just the soldiers serving in Dixie. The original 148th was recruited from the Finger Lakes regions of New York. They were assigned to the Army of the James and served under Major General Benjamin “The Beast” Butler. Some of the battles they participated in were Drewry’s Bluff, Cold Harbor, the Siege of Petersburg, Chaffin’s Farm, Fair Oaks, the Appomattox Campaign, and the post-war occupation of the city of Richmond. They had five Medal of Honor recipients, and suffered more than 500 casualties. The 148th of today recruits its members primarily from the Finger Lakes area. In 1962, the 148th began with six members from the Ovid Camp of the Sons of the Union Veterans of the Civil War. Membership in the SUV is a tribute to those “Sons of the Finger Lakes” who answered Lincoln’s call for 300,000 more! 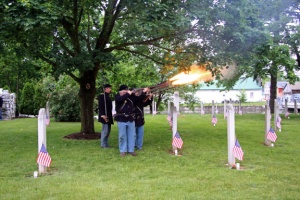