The 26th Regiment United States Colored Infantry, also called the 26th Regiment New York Infantry (Colored) was an African American combat unit, one of three colored troop units from the state of New York, that fought in the American Civil War. The unit was organized on Riker’s Island in February 1864 by the Union League Club of New York.

The commanding officer was Col. William Silliman. After a short deployment at Annapolis, MD, the regiment was sent to the Department of the South and participated in battles at Johns Island, Honey Hill, and Tulifinny, South Carolina. Lt. Col. William B. Guernsey succeeded Col. Silliman on June 18, 1865, and the 26th Regiment was mustered out under his command in South Carolina on August 28, 1865.

Notable members include: David Carll, who has a hill in Oyster Bay, NY, named after him; Noah Elliott, the unit’s hospital steward, who went on to become the first African American physician in Athens, Ohio; and Benjamin F. Randolph, who as Chaplain was the unit’s sole African American commissioned officer, and who was a delegate to South Carolina’s Constitutional Convention in 1868. 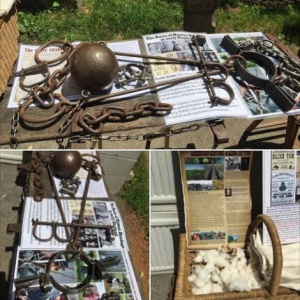