History of The Village of Waterloo

The story of Waterloo begins with the Cayuga Indian village of Skoi-Yase, established about the year 1500, and located near the rapids of the Seneca River, near the present location of Locust Street in Waterloo. The Cayugas valued Skoi-Yase, meaning “flowing water” because of the abundant supply of fish, especially eels, in the Seneca River. Many great Indian councils were held at Skoi-Yase; the national Indian leaders Red Jacket and Chief Corn Planter attended some of the deliberative sessions.

Because of the Iroquois Indian’s support of the British during the American Revolutionary War, General George Washington in 1779 ordered General Sullivan to destroy Iroquois villages and crops in upstate New York. Thus, in 1779 Revolutionary soldiers destroyed Skoi-Yase. Chief Corn Planter.

In 1792, a white man named Samuel Bear reached this site, looking for a place to settle. He saw the possibilities in the water of the river to use for himself as power for a grist mill and to sell to others who might come later. In this first year he made friends with the Cayuga’s, cleared land for a settlement and built his home before returning to his home in Pennsylvania for the winter. The next spring, he returned to Skoi-Yase with three millers, Casper, John and George Yost, and with his cousins John and Ephraim Bear. With the help of the neighboring Cayuga Indians, they continued the work of digging raceways to harness the water power and built his mill. With crude stones, he began to grind grain into meal. It was the only grist mill within several miles and brought in many early pioneers. Bear started a general store in Skoi-Yase and was the first merchant in town. Waterloo’s earliest industries, such as distilleries and tanneries sprang up along the Seneca River, utilizing the water power of the river.

Early Waterloo was a thriving industrial village. Historical events of national importance have occurred here and given birth to many “firsts.” Much of the planning for the first Woman’s Rights Convention held in Seneca Falls, NY in 1848, took place in Waterloo at the Hunt and McClintock houses. The most significant Waterloo first is the birth of Memorial Day. On May 5, 1866, Waterloo conducted the nation’s first formal, continuing remembrance of veterans who had died in war. The Federal Government in 1966 formally recognized Waterloo as the Birthplace of Memorial Day. The Mormon religion had its birth on the Peter Whitmer farm two miles south of Waterloo and tile drainage in America was originated by John Johnston on his farm a few miles west of this village. The first Pullman car was conceived and constructed by a Waterloo man, Major Frederick Furniss. In the 1890’s, funeral directors Mr. Genung of Waterloo and Mr. Eckels of Philadelphia developed the first modern method of embalming. 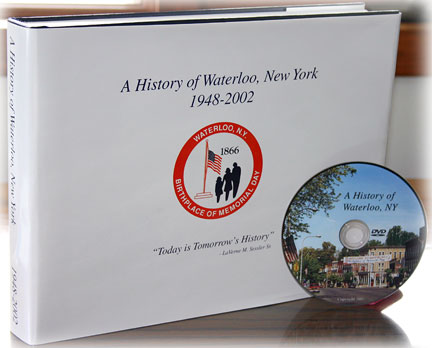