This year during the Celebrate Commemorate Weekend in Waterloo, NY there will be an additional ceremony at its American Civil War Memorial located on the corners of Washington and Locust Streets.

Not only will there be the 12th annual Illumination and Remembrance Ceremony at 7:30 pm, Friday, May 22nd supported by five (5) Civil War Organizations and the Celebrate Commemorate Committee, but there will also be a Battle Casualties Plaque Dedication on Saturday, May 23rd at 2:00 pm

The Battle Casualties Plaque will be located in back of the Northside of the Star Stone at the memorial. This plaque is the last addition to the memorial that commemorates the fallen soldiers from Waterloo, who caused the first Memorial Day Commemoration, as well as all lives lost during the American Civil War.

Join us, If not on Friday, May 22nd at 7:30pm for the Kick off of Waterloo’s Celebrate Commemorate weekend, then on Saturday May 23rd at 2:00pm where we will be sharing in our program the horrific losses to not only the North, but the South, in the top ten (10) battles with the most casualties. 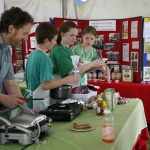