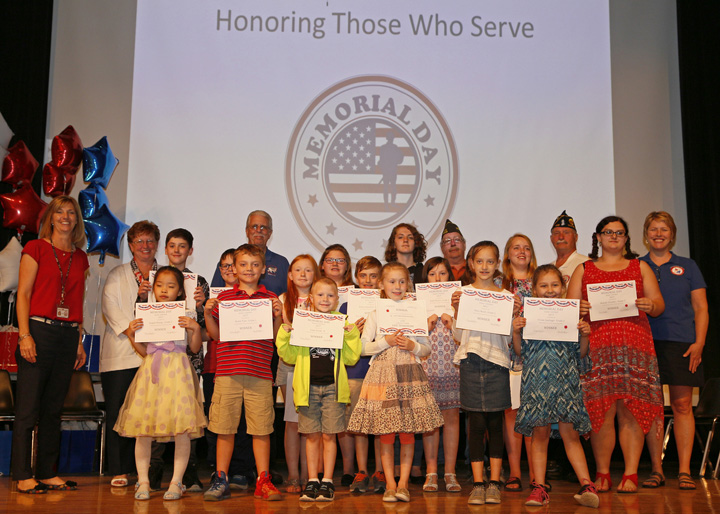 It was a pleasure to celebrate with these students today as the Creative Expressions essay contest winners were announced.  Grades K – 8 participated, with more than 200  submissions! 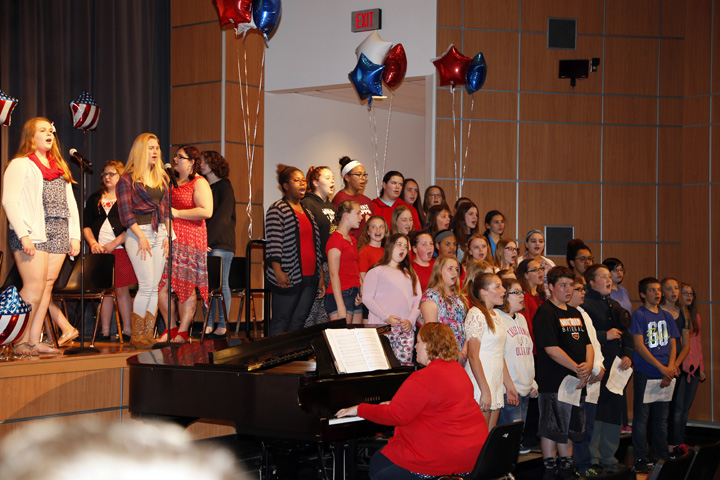 We were also entertained by the talented middle school chorus

Special thanks to Janelle Bradshaw, Lisa Sessler and all of their judges and helpers who make this such a meaningful event every year. 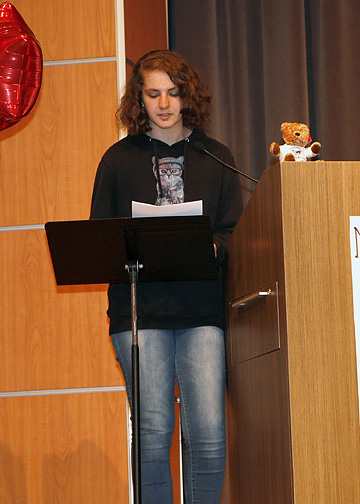 Freedom is defined as “the power or right to act, speak, or think as one wants”. But what does freedom really mean? As Americans, we are able to experience freedom each and every day of our lives. Other people, however, aren’t as fortunate. We have been granted an amazing privilege, but do we ever take time to appreciate it, or better yet, the people who gave it to us? Without these brave men and women who put their lives on the line to serve, none of us would know what freedom truly feels like.

Throughout time, the thought of honoring veterans has slowly slipped from our minds and our true heroes are being forgotten. Social media and the world of celebrities have taken over our minds. Every day we see things, whether it’s on our phones or the TV, that influence the way we think, and not for the better but for the worse. We are taught to idolize actors and singers, people who are just like us but with a more well-known name. Many veterans come home and are only known by their friends and family. Some die out on the field and their identities are never even discovered. Many of us wake up every morning and don’t even want to get out of bed, we don’t want to go to school or work because it’s “too hard”. These men and women, however, wake up every day with a passion in their heart and go out to a battlefield to risk their lives so that we can just wake up and complain about how hard our lives supposedly are. Many people can’t even sit through a horror movie; imagine living one every time you wake up. Simple courtesy among people like us has been lost over the years, too. We barely even hold the door open for one another, or are able to say a simple “good morning” to our family. There are people, though, who used that energy that you couldn’t muster to say hello to fight for you to be able to say such a simple word. These are people who risked their lives simply so you could keep yours. So why not thank them? Why not honor them?

We also need to remember that we are not the only ones affected by veterans; they fight for the rights and freedoms of people in other countries too, such as Iraq and Afghanistan. Soldiers have not only protected us, but have made the decision to protect everyone. They have made a tremendous impact on not only the United States, but the world as a whole. If just being able to see the progress they have made over the years isn’t enough to convince you how much good these men and women do for everyone, than I don’t know what will. These people aren’t just American heroes, they are world heroes. I mean, what greater sacrifice can one give than your life? Our veterans have left their families because of the passion they have for their country. They enlist fear and worry in their moms and dads, brothers and sisters, about whether or not they’ll come home so that the whole nation doesn’t have to feel those emotions about themselves. By now, everyone knows the dangers of war, and yet, these individuals are courageous enough to still step out onto that battle field and fight. They fight for the red, white and blue every day. They work hard to ensure the work of the generations passed doesn’t go to waste.

Now I ask: what is freedom to you? Is it being able to say what you want every day? Is it watching your children or being that child that goes to school every week? Is it waking up every day without the fear of staring down the barrel of a gun, hoping today isn’t your last? There are people all over the world who have no idea what any of that feels like, but so desperately want to. Every morning at the beginning of our school day, we all stand and place a hand over our hearts to recite the Pledge of Allegiance, however not many of us actually take those words to heart. They’ve become routine and we no longer value what they truly mean. Thousands of men and women over hundreds of years have given up everything they’ve ever known so we can come to school each morning and say these words. They have taken the ultimate Pledge of Allegiance to their country by leaving home to fight for these words, these freedoms. Without their fiery passion and outstanding bravery, we wouldn’t know what freedom feels like. Memorial Day is only one day where we are asked to honor a group of individuals who should be honored every day. If you can’t make it your duty as an American citizen to honor them every day, Memorial Day is the one day where all of us as American citizens should make it our duty to honor and remember these heroes of war. And so, I would like to leave you with one last thought: when was the last time you truly took a moment to think about and honor these fearless fighters and all they have so graciously sacrificed to allow you the freedom you feel today?