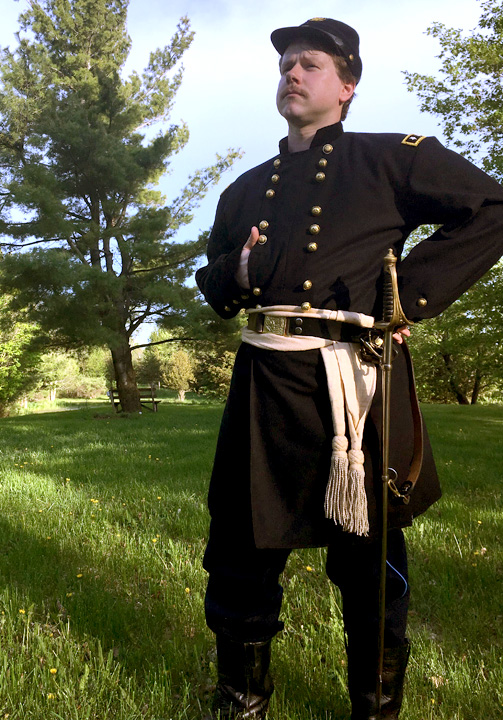 General George Brinton McClellan is one of the most controversial figures in American history. Praised by friend and foe alike as the brilliant organizer who developed the impregnable defense of Washington, D.C. and established the basic structure and supply mechanism of the Union army that allowed it to defeat the Confederacy, yet vilified for not following through on battlefield victories and always way over-estimating enemy strength, being blamed for dragging out a war that many believe(d) could have been won in a matter of months, rather than the years it took.

Come and meet the man himself and form your own opinions, or at least gain a desire to learn more about this very interesting, and some say very misunderstood, genius of our American past, portrayed by the 148th NY Volunteer Infantry Regiment, Sons of Veteran Reserve’s own John Goloski.

John is a public school teacher of 7th and 8th grade Band at the Indian River Central School District in Philadelphia NY.  John started reenacting as a child in 1992 when his family joined the 148th New York Volunteer Infantry Company E, based in Waterloo NY. The 148th, which is both a reenacting organization and a Sons of Veterans Reserve unit, attended many events and living histories at which John’s love of history and military music sparked his interest and developed a passion that would last all of his life.

Shortly after joining the 148th John started practicing ancient rudimental drumming to be able to portray a musician and continued to develop his music skills.  He attended the Crane School of Music at SUNY Potsdam and graduated with a bachelors and masters degree in Music Education.

Of all the achievements accomplished with the 148th John is most proud of the units restoration of the original battle flag of the 148th.  It is currently housed in Saratoga at the New York State Military Museum.  He is very excited to portray General George McClellan at Celebrate Commemorate Memorial Day this year and looks forward to the weekend!