General Robert E Lee traveled to the Stewart-Lee House in Richmond, Virginia, in mid-April of 1865, after the surrender of the Confederate Armies to U.S. Grant. His family had been living in that house during the latter stages of the war so it was a natural destination for the defeated Commander of the Confederate Army of Northern Virginia. He was welcomed by family and friends but was a man with no citizenship, no career, and uncertain prospects.

Matthew Brady, the recognized impresario of Civil War photographers badly wanted to capture a photograph of the General. Such a photo would be a large part of history and, not inconsequentially, a sure money maker. Lee, however, wanted no part of such a thing. He had always dodged the camera, and particularly now, as the discredited leader of a beaten army, felt that no-one would ever really want such an image. Brady, however, was determined and, through his relations with Colonel Robert Ould, the Confederate Agent for the Exchange of Prisoners who was good friends with Lee’s wife, a sitting was reluctantly scheduled.

The back door of the Stewart Lee home was chosen for the setting and Lee was accordingly positioned for a photograph. However, in Brady’s hurry to set up the photo with an unhappy subject, Brady did not look over the background well enough to notice a problem. A Union sympathizer, recognizing that this was the house of General Lee, had scrawled the word “Devil” on the bricks next to the door.

Brady did not notice this until the photographic imaging was in process. He was now faced with some choices. It would be very inappropriate to tell the General “excuse me but we need to redo this image because of the graffiti on the wall”. He also could not just repeat the image because the tradition of the time was to take different views (different positions, hand on chair, sitting, etc) and not to waste precious time and glass plate negatives on duplicate views. Instead, Brady improvised, repositioning Lee very slightly in front of the door and, in the process, rubbing out the graffiti. Lee, being the very controlled individual that he was, assumed almost the same stance as he had for the first picture and a second image was accordingly captured. Although these two pictures of Lee are among the most familiar images of the war years, the specific conditions and the possibility of them constituting a stereo image lay unrecognized.

In 2009 these images were of particular interest to the authors who were attempting to replicate the setting for use in a first person historical presentation on the life of Robert E Lee. Under close inspection, the two images show remarkable similarity in Lee’s stance. Since Civil War stereo photography is also one of the subjects for first person historical presentations, and a stereo photograph requires two separate but similar images of the subject, these photographs clearly demanded more investigation.

Analyzing the position of Lee’s feet on the brick flooring of the porch in these two images showed that Lee’s feet had moved slightly between views but the camera angle had stayed approximately the same. Using the magic of Adobe Photoshop©, the two Lee images were adjusted so Lee’s placement in the images was the same except for the perspective changes from the effective location of the camera. Thus, a stereo image was created based on the two separate photos which just “happened” to be taken of the same subject at slightly different times. While Photoshop was being applied, the size and placement of the subject was adjusted to be the same and the background removed to simplify the images and remove conflicting depth cues. There remain a few differences between the images, Lee in 3-D August 30, 2011 Copyright © 2011 Vintage Visuals All Rights Reserved

particularly in the placement of Lee’s spectacle strap and the fall of his coat. These, however, do show that the pictures are from different negatives.

This brings together the elements of graffiti, a botched photo sitting, and two guys in Kansas trying to recreate the scene for a historical presentation. While the narrative is the result of conjecture by the authors, the final proof is in the viewing of this never before seen stereo photograph of General Robert E Lee.

Previous to this finding, there were only two known stereo photographs of Lee. Both are classic formal bust poses taken by Brady after Lee had returned to civilian attire. Thus, the photograph presented here is only the third known true stereo of General and is also the only stereo of Lee standing in uniform. 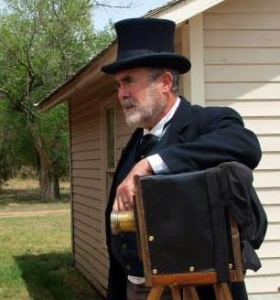