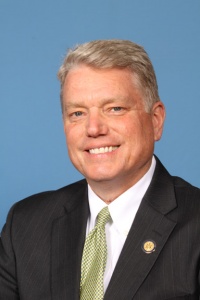 Brian U. Stratton was appointed Director of the New York State Canal Corporation in April 2011, to oversee the operation and development of New York’s 524-mile Canal System, including the historic Erie Canal.

He was appointed at the recommendation of Governor Andrew M. Cuomo, and serves as a member of the Governor’s Cabinet.  Prior to joining the Canal Corporation Mr. Stratton was elected Mayor of the City of Schenectady on November 7, 2003, and re-elected to a second term in 2007.

As Mayor, Mr. Stratton also served from 2009-2011 as Co-Chair of the United States Conference of Mayors Water Council, leading mayors of more than 300 American cities in the discussion and national policy formation of issues impacting how cities provide safe and affordable water and wastewater services.

Mr. Stratton received his Bachelor of Arts Degree from SUNY Oswego in 1979.

Director Brian Stratton has an interesting connection to Memorial Day in  Waterloo.  His father, Congressman Sam Stratton was instrumental in assisting the Memorial Day research committee as they pursued our official designation.  In 1966 he was in Waterloo to read the presidential proclamation from Lyndon B. Johnson and presented Mayor Marian DeCicca with the pen he used to sign it.  We are very pleased to have Brian here to  commemorate with us and share his thoughts and feelings on this 150th anniversary.