Always a popular visitor, Gib Young as Teddy Roosevelt, 26th President of the United States, will return to the M’Clintock house at 1pm and 3pm Saturday and 12:30 pm Sunday.

Conservation of our natural resources increasingly became one of Roosevelt’s main concerns.  After becoming president in 1901, Roosevelt used his authority to protect wildlife and public lands by creating the United States Forest Service (USFS) and establishing 150 national forests, 51 federal bird reserves, 4 national game preserves, 5 national parks, and 18 national monuments by enabling the 1906 American Antiquities Act.   During his presidency, Theodore Roosevelt protected approximately 230 million acres of public land.  Today, the legacy of Theodore Roosevelt is found across the country. There are six national park sites dedicated, in part or whole, to our conservationist president.  “We have fallen heirs to the most glorious heritage a people ever received, and each one must do his part if we wish to show that the nation is worthy of its good fortune,” Roosevelt said.  In previous visits to celebrate Commemorate, Roosevelt delighted audiences with his “bully” performances and his outspoken opinions on matters that interested him.  “We have become great because of the lavish use of our resources, ”Roosevelt said.  “But the time has come to inquire seriously what will happen when our forests are gone, when the coal, the iron, the oil, and the gas are exhausted, when the soils have still further impoverished and washed into the streams, polluting the rivers, denuding the fields and obstructing navigation.”  Other reenactors visiting the M’Clintock House will be Constance Clowers as Mrs. Ulysses S. Grant discussing women’s issues of the time at 2pm Saturday and Carolyn Evans as Sojourner Truth talking about her struggles for women’s suffrage at 10:30 pm Sunday. 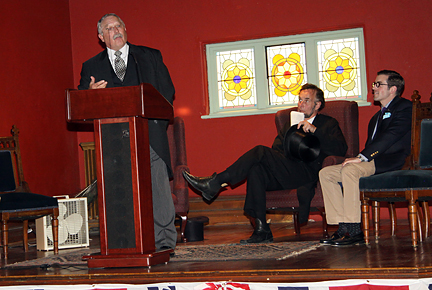