A special ceremony at the American Civil War Memorial will seek to “bind the wounds of war,” reuniting the north and south following the Civil War. 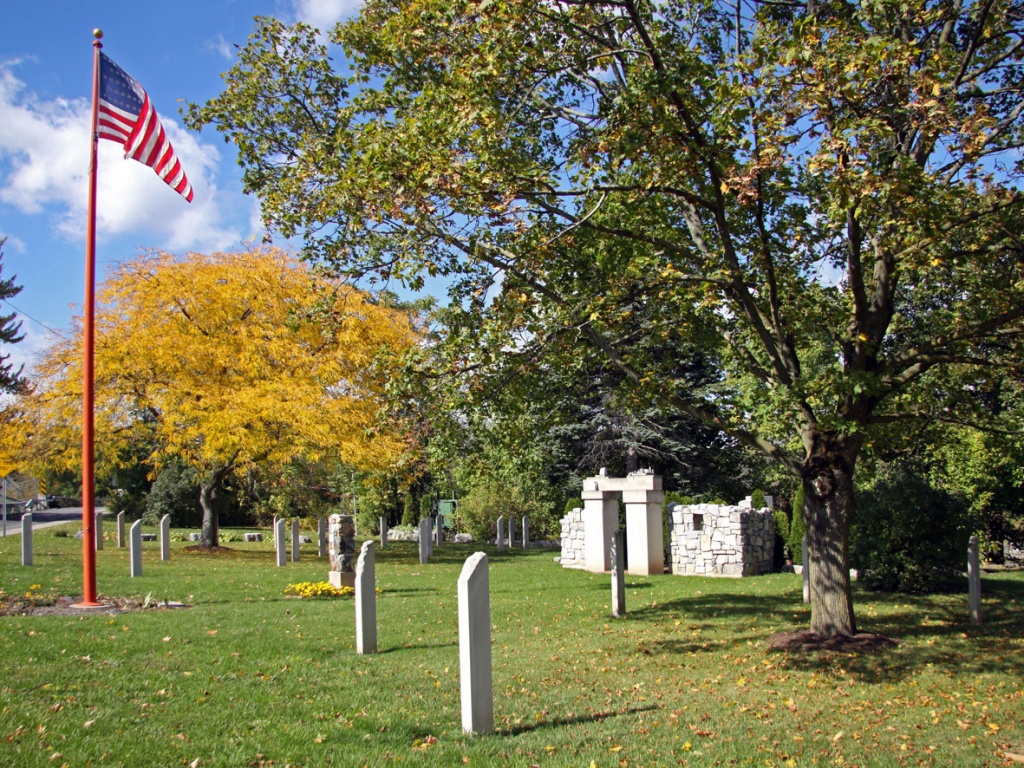 The ceremony also will signify the completion of the American Civil War Memorial, that pays tribute to the sacrifices made by citizens of Waterloo during the Civil War, and recognizes the 58 soldiers from Waterloo who gave their lives in the conflict.

In September 2008, the Daughters of the Union Veterans of the Civil War, New York Department, dedicated the American Civil War Memorial adjacent to Lock 4 of the Cayuga-Seneca Canal on Washington Street.. Citizens turned out to carve the 58 cenotaphs and incise gold stars in the star stone, each star representing 1,000 men who died in our nation’s bloodiest conflict.

Caren Cleaveland, Living History chair, said the Memorial will get a facelift for the special event.  She said the Star Stone stars will be re-gilded for the 150th Anniversary of Memorial Day Weekend and the North/South Cenotaph will be cleaned and re-sealed. It is composed of a rock from each of the 36 states that existed during the Civil War, A new 36 Star “Wagon Wheel” flag will fly from the red flagpole and the grounds will be manicured.

During the village’s Memorial Day weekend events each year, an illumination and remembrance ceremony is conducted at the Memorial on Friday evening.  At 8 p.m. May 27, the program will include the 26th United States Colored Troops, Waterloo High School Varsity Ensemble, and members of Tent #109 Mary Gahan, Waterloo, Daughters of Union Veterans of the Civil War. The family of the late Dale Theetge and the NY 7th Cavalry will lead the procession with the memorial lantern. Cleaveland will perform the Memorial Day Song written by Tony Mullins, and the High School Varsity Ensemble will sing “Blades of Grass and Pure White Stones”.

The roll call of the fallen will be given by Larry Clowers as General Ulysses S. Grant during which time lighted candles, flags and roses will be placed at each cenotaph as the names of the honored dead are read.  Tim Bulls of the 140th NY Volunteer Infantry, as Gen. John B. Murray, will recall the history of Memorial Day in Waterloo.  The keynote address will be given by Michael Crutcher Sr as Frederick Douglass, who will deliver his Arlington Decoration Day speech.

Fritz Klein will deliver a speech he wrote for the 200 year old National Park Service to use during the Lincoln Funeral Train events. The authentic Civil War Excelsior Cornet Band will perform.

The last four stars will be inscribed in the memorial’s Star Stone by Frederick Douglass, representing the abolishment of Slavery in our Country; General Lee for the Confederate lives lost and good will towards men; Sojourner Truth, representing women’s rights and women’s part in the Civil War, and General Grant symbolizing the reunion of our country and its future growth towards reconciliation.

That will complete the 620 stars, each star representing 1,000 soldiers lost during the American Civil War, Union and Confederate Combined.

All Presenters will be available for pictures, discussion and autographs after the ceremony.

Tours will be available for visitors to the American Civil War at various times throughout the weekend. Stop at the new Memorial Docent Cabin.

The cabin has been planned since 2007, when the committee discussed how to offer educational displays and presentations to those who visit the memorial.  It was always thought that it would be a wonderful Boy Scouts of America, Eagle Scout project. This year, Romulus Boy Scout Nathaniel Bauder took on the project.  He had played his part in the making of the memorial by inscribing a star in 2008.

He is a member of the Reynolds Battery, and has participated in Celebrate Commemorate Memorial Day demonstrations and the Veteran’s Parade on the 30th of May since before 2007.

For his Eagle Scout project, Bauder worked to organize, fundraise, design and source materials to complete the cabin.  He designed the Docent Cabin in an authentic form appropriate to the memorial site, using his knowledge of the history of the Civil War as his guide.

Eileen Glanzel, President of Waterloo’s Mary Gahan Tent #109, Daughters of Union Veterans of the Civil War 1861-1865, is leading the Tent while it plans to host an Allied Orders and Special Guests Event during Waterloo’s Memorial Day Weekend,

“This is a special year, not only for Waterloo “Birthplace of Memorial Day,” but, the Grand Army of the Republic, as they are both celebrating their 150th year,” she said.

The Tent has sent invitations around the country inviting the many Civil War organizations to Waterloo.  National Commanders and Presidents of the Allied Orders from the Union and Confederate descendant organizations will be in attendance for the weekends’ activities.

Special events have been planned in their honor and they are looking forward to showing their numbers in Waterloo’s Freedom Parade at 11 a.m., Saturday, May 28th.  With all the descendants, living historians, musicians and character presenters in the village for the weekend, Unit 2 of the parade looks forward to being “a parade within a parade.”

“We march to emphasize and offer respect for the lives lost to the Civil War,” said Cleaveland, National Junior Vice President, DUVCW and chair of the Living History observance. “It was these losses that caused Henry C. Wells and John B. Murray to give birth to our National holiday in 1866.”