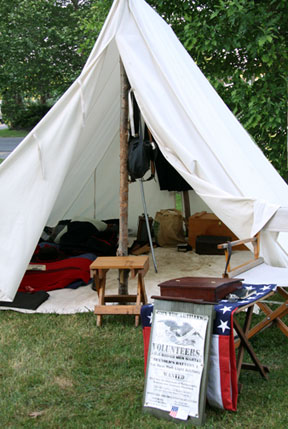 Reynolds Battery L. 1st NY Light Artillery was formed in 1982 to honor the original battery and educate the public about the Civil War. Members of Reynolds’ Battery are all volunteer and come from as far away as Buffalo and Ithaca. The original Battery L, 1st New York Light Artillery, was raised by John A. Reynolds of Rochester, NY, in September 1861. Recruits were drawn mostly from Rochester, but ranged from all over Western & Northern New York, and Canada. On October 18, 1861, the Battery was officially mustered into the United States Army in Elmira, N Y. They were armed with the first six Model 1861 3″ Ordnance Rifles in the country. From Elmira, the Battery was sent to West Virginia. Their first engagement occurred when a section under Lieutenant Loder came into action in Charleston, WV. On 28 August 1862, the Battery was transferred to the I Corps, Army of the Potomac, and it participated in all the engagements of that Corps until 1864, including Second Bull Run, Antietam, Fredricksburg, Chancellorsville and Gettysburg. In March 1864, the Army of the Potomac reorganized and the I Corps merged into the V, which Reynolds’ Battery served with through the end of the war, including the battles of Wilderness, Cold Harbor, and Petersburg. Of the approximately 115 men who had originally joined the Battery, 25 still remained with the unit at the time it was mustered out of service on June 17, 1865. A total of 320 men entered service as members of Reynolds’ Battery L. Of these, nine were killed or died from wounds received in action while 14 died from sickness contracted in service. In 1982, Frank Cutler gathered some like-minded reenactors and founded the 1st New York Light Artillery, Reynolds’ Battery L. At first, the Battery had a 3/4 scale cannon, which was sold to raise money for another cannon and this pattern of making and selling was begun. Slowly, over the years, Reynolds’ Battery began to reach its goal of fielding four 3″ Ordnance Rifles with limbers The group received its first 3″ Rifle in 1987, the second was fielded in 1996 and the third in 1997. Although the group members take their hobby very seriously, they have a lot of fun while educating the public and, most importantly, honoring those of the Civil War.