Our guest speaker will be CSM Marc Maynard 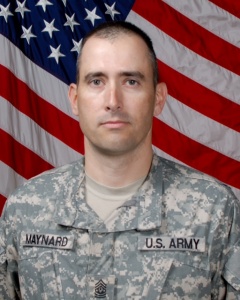 CSM Maynard began his military career in September of 1986 at Ft. Leonard Wood MO. Upon completion of his training as a Bradley Fighting Vehicle Hull System Mechanic he served with the 3rd INF DIV in Germany until 1988. After completing his tour of duty he transferred into the National Guard and reclassified as an 88M in 1991.

As a member of A co. 427 BSB CSM Maynard served in the positions of Heavy Vehicle Operator, Dispatcher, Squad Leader, Truck Master, Platoon Sergeant and First Sergeant. As a Squad Leader he deployed with the 719th Trans. Co. to Kuwait and Iraq in support of OIF.  As First Sergeant he deployed with A Co. 427 LTF, TF Phoenix VII to Afghanistan in support of OEF.  Also during his membership with A Co. 427 BSB CSM Maynard participated in several other NY State relief missions including Operation Ice, Operation Chipper, Operation Whiteout, and the joint force training Operation Northern Viking.

CSM Maynard is a graduate of the United States Army Sergeants Major Academy.  He holds a Bachelors Degree in Divinity from Northstar Bible Institute.  He is an electronics repairman at Combined Maintenance Support Shop C in Rochester, NY and resides in Spencerport with his lovely wife Sherry and four children.